To share your memory on the wall of Coach Wayne Hensley, sign in using one of the following options:

To send flowers to the family or plant a tree in memory of Coach Wayne Hensley, please visit our Heartfelt Sympathies Store.

Receive notifications about information and event scheduling for Coach Wayne

We encourage you to share your most beloved memories of Coach Wayne here, so that the family and other loved ones can always see it. You can upload cherished photographs, or share your favorite stories, and can even comment on those shared by others.

Posted Sep 17, 2019 at 03:42pm
I'm very sorry to learn of Coach Hensley's passing. He's one of the best I ever knew. He was first class all the way and very hard to beat. I always used to tell the boys that they were going to have to outplay Potosi, because I was going to get outcoached. I really enjoyed our conversations. Quality man, outstanding coach.
Comment Share
Share via:
FR

Posted Sep 17, 2019 at 01:48pm
Was so sorry to hear about Coach Wayne passing. He was my coach the 1st year of Rapides High in Lecompte.
Comment Share
Share via:
L

Posted Sep 06, 2019 at 06:45pm
My name is Lewis Lineberry. I was a classmate with Wayne at Steele High School, Steele, Mo.
Wayne and I were on the basketball team that went to the state tournament in 1960. That was our Junior year. We lost but it was the first time in over 30 years our school had been to state in basketball.
Wayne was our center and played most of his games against a taller player but you wouldn’t have known it except at tip off. HE PLAYED TALL, you basketball players will know what I mean.
Wayne was very easy going, one of the nicest guys I grew up with. He was very smart algebra and higher math classes wasn’t or didn’t seem to be, a challenge.
I remember him leaving for college at mid term his senior year and I know it was hard for him but he and we knew it was his chance to play basketball at the next level and the best opportunity to get more education.
I was mostly a guard and I can still see the expression on his face , completely focused, with hands up wanting the ball.
I still remember us going up under the basket for a rebound and of coarse he got it and all I got was a mouthful of elbows, LOL.
He was by no doubt our best player.
One more memory. When we were freshmen we played the senior class in the gym during the lunch hour. As I remember it, most of the school showed up and we played until the bell rang. Wayne’s brother Lloyd and my brother Jerry were seniors and we WON.
Wayne along with my other classmates will be with me until. My prayers are with his family and friends. We will miss him.
Maybe one of our memories of him will be. HE PLAYED TALL. SO SHOULD WE. 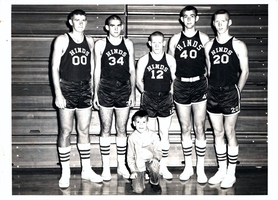